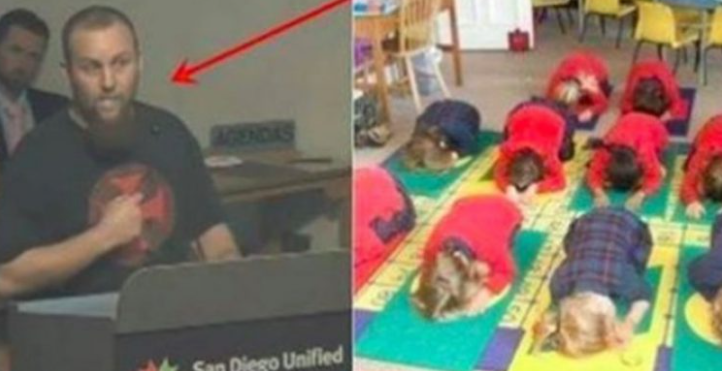 Christopher Wyrick has always been a stand-up guy. Even though he lives in the large urban area of San Diego, he believes that America should be first in every aspect of his life simply because he believes that this is the greatest country on the face of the Earth. That is why when the San Diego Unified School District teamed up with the Council on American Islamic Relations to teach his children all about the Islam religion.

The school was attempting to instill a program that would protect all of their Muslim students, but members of the school board quickly learned that this program was controversial at best and downright unacceptable at the worst.

Mr. Wyrick was particularly alarmed when he learned that conservative websites were reporting that the student body was not only learning about the Muslim belief system but that they were also going through a mock lesson where they pretended to worship just like Muslims do as well!

Of course, before Wyrick spoke school trustee Kevin Beiser attempted to clarify what the educational program regarding Islam was all about. “We don’t want Muslim students to be spit on,” he said as reported in the San Diego Tribune.

At least one parent agreed with him, chiming in that they believed that “all students should be safe.”

However, Christopher Wyrick is a parent within that district as well, and he was having none of it. He was very blunt when he asked, “At what point in time did the school district decide that it was okay to teach my children about Islam?” However, that wasn’t all that he said. Wyrick also uttered NINE WORDS that summarized how he and many other parents felt.

Even though he was pressured by many of the liberal parents to leave the podium, he was adamant that he would have his say. “You’re gonna have to drag me out of here,” he said flatly. His comments quickly went viral.

In short, there was a tremendous amount of people who applauded Wyrick and blasted the school for using their anti-bullying program to just focus on the politically correct notion of condemning Islamophobia. Indeed, some even compared it to having Sharia law in the school district.

One reader on social media didn’t mince words when they commented on the subject. “Keep going after them, Mr. Wyrick. We all know that the organization CAIR is nothing more than a front for the Muslim Brotherhood. That means that we know that EVERY MEMBER of CAIR is also a member of the Muslim Brotherhood. We also know that CAIR is pushing these Islamic teaching all over the country, and this teaching is actually a FORCED CONVERSION to Islam and that is in fact ILLEGAL. We should have everybody on the San Diego School Board fired.”

“Good for you, sir,” another poster commented. “I do stand behind you 100 percent. I can’t believe that some of this crap is being taught in America’s public schools. I can’t even imagine what would happen to us if we went to their country and tried to enforce our beliefs over there! This is America and we already have our beliefs. If you don’t like it, you should go back where you come from!”

Finally, another person stated that if Christians had tried to enact this same type of program that “All h*ll would break loose! Parents need to wake up!”

What do YOU think about the policy that the San Diego School District tried to enact?