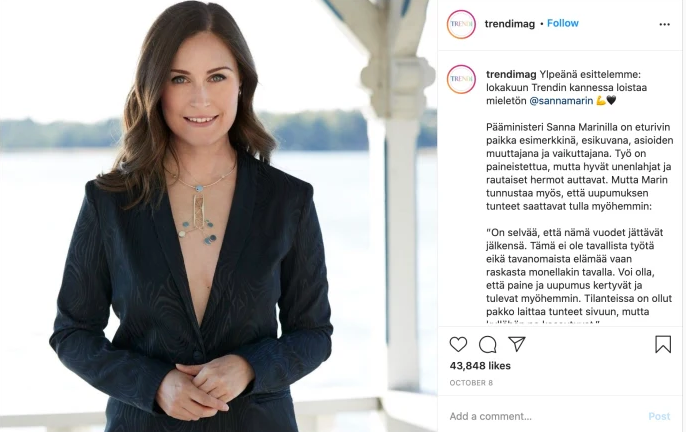 Social media users everywhere are offering their support for a certain prime minister who is facing a bit of backlash for a photo shoot that had been done for a leading fashion magazine.

It appears that Finnish Prime Minister Sanna Marin is now being slammed on social media because she was wearing a plunging neckline for a magazine spread. This 34-year-old Prime Minister posed for the Finnish fashion magazine Trendi, and many Instagram users took her to task for wearing clothing that they thought was “inappropriate” for a world leader.

The photo shoot appeared in the October edition of the magazine, and it read: “Prime Minister Sanna Marin is in a leading position, and she is primed to be an influencer, a role model, and one who makes positive changes.” She recently discussed how she had a tumultuous year where she went through a lot of “exhaustion” and “pressure.” “This isn’t a normal career or a normal life,” she said. “But it is a heavy job in many different ways.”

Of course, Marin was quick to psychoanalyze herself, saying, “It could be that this pressure and exhaustion accumulate and come up on you later. In most of the situations that we’ve encountered over the past year or so, it has been necessary to put the emotions aside, but they do indeed accumulate.”

Of course, it wasn’t long after Marin encountered this criticism that many different people from all different walks of life rallied around her, posting messages with the hashtag #imwithsanna, and some were even sharing images of themselves dressed in outfits that were similar to the prime minister’s.

Another counterargument that many were using was to post several instances of male politicians who had posed in revealing outfits themselves in the past. For instance, one person showed a picture of Finnish President Urho Kekkonen, and yet another showed a controversial shot of President Carl Gustaf as well. They were doing this to point out some of the many double standards they saw.

“Kekkonen has always been quite the hipster,” one person tweeted in response to this rebuttal picture. Then, someone actually posted Kekkonen and President Marin’s pictures side-by-side as well.

“This is a great picture of our prime minister,” another person commented. “I think before you all criticize, you should realize that in the very near future, women will only be allowed to dress in sacks in magazine photos so that no one can call their competence or reliability into question or point out silly external factors.”

Another person noted that she thought it was great to see all of the support that the Finnish prime minister was getting. “Quite awesome to see that people are supporting each other!” she commented.


Anu Koivunen is a professor of Gender Studies at Tampere University, and she told the magazine that the image of the Finnish prime minister was simply a tool from the opposing party that will used to criticize Sanna Marin either as a person or as a person. It doesn’t matter what side they are, these politicians know full well that these pictures will cause a firestorm of controversy and the fact that there was a social media storm over her outfit shouldn’t come as a surprise to us.”

Marin became the Prime Minister of Finland on December 8, 2019, and she is currently the world’s youngest world leader.