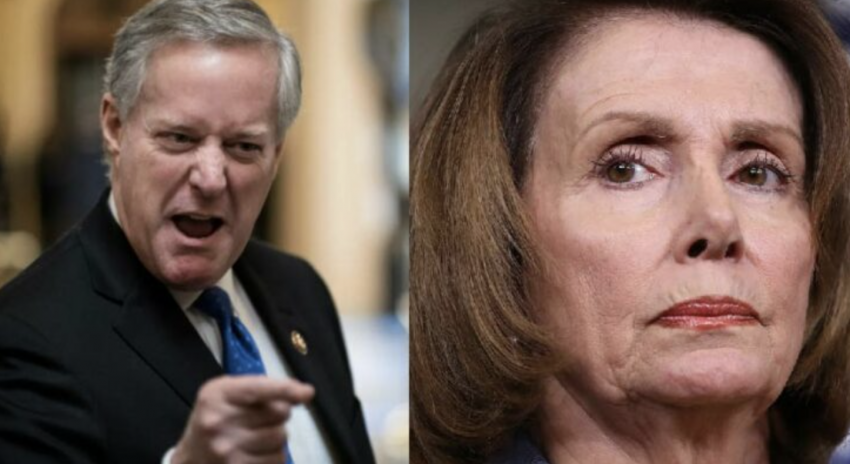 The left just won’t give it a rest with January 6 and the non-stop push to prove that Donald Trump caused the so-called “riots” at the Capitol. In the left’s deranged mind, they are convinced that Trump gave an order for his supporters to “storm” the Capitol and cause harm to members of Congress.

That could not be further from the truth as we all know from watching that day unfold or listening to Trump’s speech. At any rate, Nancy Pelosi and her goon squad are dragging anyone connected to Trump and that day to appear in front of a committee to explain what occurred. One of those who have been called to speak to Pelosi and her fellow witch hunters is Mark Meadows who was President Trump’s chief of staff at the time of the incident.

Early on, Meadows agreed to cooperate with the committee and sent over thousands of pages of non-classified documents and text messages for Pelosi and her jackals to review.

However, that wasn’t good enough.

Pelosi wanted more, so she and the partisan committee subpoenaed Mark Meadows. That is when Mark made his move and said “enough is enough” refusing to cooperate any further and now, he just made another major move.

If Meadows wins this, he may not need to make a third move and it will essentially leave Pelosi crippled.

Here is more from Conservative Brief:

The lawsuit asks a federal court in Washington, D.C. to nullify subpoenas issued by the committee for Meadows’ testimony and his phone records. Meadows also argued that the demand for his cooperation with Congress is “overly broad and unduly burdensome.”

The lawsuit comes after Meadows informed the committee that he would no longer cooperate with its investigation.

Meadows argued in the filing that, “absent any valid legislative power,” may result in “grave harms” — namely that he could be “illegally coerced into violating the Constitution” in failing to comply with former President Trump’s claims of executive privilege.

“Mr. Meadows, a witness, has been put in the untenable position of choosing between conflicting privilege claims that are of constitutional origin and dimension and having to either risk enforcement of the subpoena issued to him” the complaint reads, “or, alternatively, unilaterally abandoning the former president’s claims of privileges and immunities.”

“Despite the need to maintain executive privilege and concerns about the breadth of the subpoena, Mr. Meadows continued to pursue the possibility of an accommodation that would allow the Select Committee to obtain non-privileged information,” the lawsuit alleges.

Meadows pointed out that he had handed over thousands of records to the committee, including “1,139 documents and 6,836 total pages” — all non-privileged — and “2,319 text messages and metadata from his personal cell phone.”

Meadows went on to argue in his lawsuit that the subpoenas from the House committee are “an unconstitutional attempt to usurp the Executive Branch’s authority to enforce the law and to expose what the Select Committee believes to be problematic actions by a political opponent. Congress has no authority to issue subpoenas for these purposes.”

Earlier this week, Meadows announced that he is no longer cooperating with the Democrat-run Jan. 6 Committee, according to reports that cited a letter from his attorney.

If you ask me, Meadows shouldn’t have agreed to work with them at all. I think we as conservatives need to better understand the enemy that we’re dealing with, and what they’re trying to do.

The Dems are not “reasonable” people, just trying to get to the truth.

They are swamp monsters who are using anything they can to drag themselves forward and continue amassing power.

There is no “reasoning” with people like this. It’s like trying to talk to a starving rabid wolf and convince them not to eat you for dinner.

It’s pointless. So the best thing to do is just not go near the crazy, hungry wolf in the first place.

6 thoughts on “Mark Meadows Has Just Dropped A Bombshell On Nancy Pelosi!”