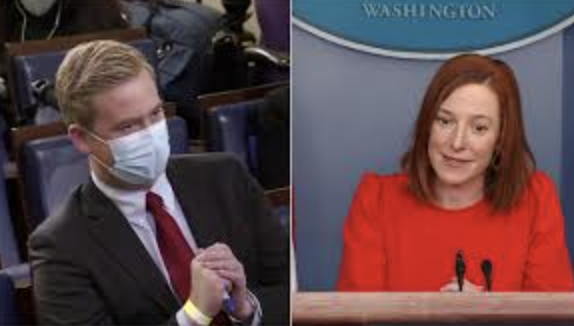 The White House press corps is filled with so-called “reporters” who throw giant softball questions at Press Secretary Jen Psaki concerning President Joe Biden and his policies. However, while the rest of these journalists are asking easy questions, Peter Doocy does not.

Earlier this week as the rest of the reporters in the White House Press corps, were busy asking Jen Psaki what flavor ice cream is Joe Biden’s favorite, Doocy actually threw a series of heaters across the plate.

Doocy started his grilling of Psaki with six questions and the last one asked left the press secretary stammering for an answer.

The first question that Doocy asked was concerning the travel ban that Biden had just instituted that affects six African nations in response to the new omicron variant.

“Before Joe Biden was president, he said that COVID travel restrictions on foreign countries were ‘hysterical xenophobia’ and ‘fearmongering.’ So what changed?” the Fox reporter asked.

Psaki responded saying, “The president has not been critical of travel restrictions,” and added that Biden’s critique also had to do with what she characterized as a “xenophobic tweet and how [Trump] called — what he called the coronavirus.”

It’s not clear which tweet Psaki is referring to. Trump started calling COVID the “China virus” in March 2020, a month-and-a-half after Trump imposed his ban on travel from China, according to NBC News.

Weeks before that, at a Jan. 31, 2020, campaign event in Iowa, then-candidate Biden made some of his best-known comments on Trump’s handling of the pandemic. Trump had issued a travel ban related to China earlier in the day.

“In moments like this, this is where the credibility of the president is most needed, as he explains what we should and should not do,” Biden said, according to FactCheck.org. “This is no time for Donald Trump’s record of hysteria and xenophobia — hysterical xenophobia — and fearmongering to lead the way instead of science.”

Doocy continued his hardline questioning, following up with why Biden didn’t wear a face mask while shopping in a store on Nantucket Island over the weekend that had a sign saying, “Required Face Covering.”

US: While on holiday, Biden browses through a shop without wearing a face mask. Despite the shop in Nantucket requiring patrons wear a mask.
Biden himself urges Americans including very young children to wear masks. pic.twitter.com/sQ3S4vyiwY

The press secretary deflected all three attempts Doocy made to get an answer, including what example Biden is setting for the American people by his conduct.

“The president is somebody who follows the recommendations and the advice of the CDC. I don’t know what the circumstances were of that particular moment,” Psaki said attempting to dismiss the line of questions.

Doocy kept after Biden’s protector by then asking about the decision to reinstitute Trump’s “Remain in Mexico” policy regarding those seeking to apply for asylum in the U.S.

He noted that Biden once described the policy as “dangerous, inhumane, and goes against everything we stand for as a nation of immigrants.”

“So why is he keeping it?” Doocy asked.

“[Biden] continues to stand by exactly those comments and statements,” Psaki answered, “And the Secretary of Homeland Security put out a memorandum conveying we want to end this program. But we also believe in following the law. And that’s exactly what we’re doing as there was — there was a ruling that required us moving forward with implementation.”

Doocy then turned to the issue of the Waukesha Christmas parade attack and asked a question Psaki particularly struggled to answer well, because there really isn’t a good answer in light of Biden’s conduct.

The Fox correspondent pointed out that prosecutors said “the assailant swerved his truck side to side as part of an intentional act to run over as many people as possible. Six people are dead. Some children remain hospitalized. Why hasn’t the president visited the members of this Christmas parade attack?”

Doocy: "Since [Biden] said that this administration is monitoring the situation in Waukesha closely, it has revealed…the assailant swerved his truck side-to-side to run over as many people as possible…Why hasn't [he] visited the members of this Christmas parade attack?" (6/6) pic.twitter.com/dAUvsP64Ff

“Well, I would say first: As you saw the president convey last week, our hearts go out to this community, to the people in Waukesha; that we’ve been in touch, obviously, with officials there; and we’re all watching as people are recovering,” Psaki said.

“And this is such a difficult time of year for this to happen. It’s difficult anytime.”

Psaki then prevaricated and hemmed and hawed a bit about how difficult it is for presidents to travel someplace. No trips are currently in the works, “but we remain in touch with local officials.”

Biden visited Minnesota on Tuesday, for crying out loud, to plug the newly signed infrastructure bill.

In case you all forgot, Biden when he was the presidential candidate, flew to Minnesota to meet with George Floyd’s family and went to Charleston after the 2015 church shooting as vice president. Then-President Barack Obama did too.

The only thing that appears different from those tragic instances and Waukesha is the skin color of the victims and the accused are reversed.

Stopping in Waukesha to comfort the victims’ families works against the Democratic narrative Biden has been pushing his whole presidency: Everything that’s evil and wrong in America is caused by white supremacists.

1 thought on “Doocy Went After Biden’s Gatekeeper, And She Folded Faster Than Superman On Laundry Day! [VIDEO]”