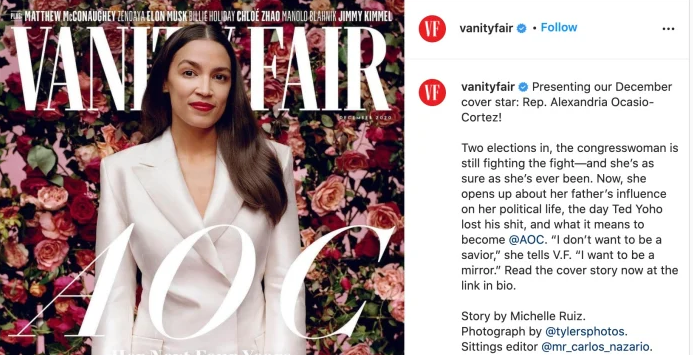 You know how sometimes you run across one of those politicians that everyone loves to despise? You know, one who is the paragon of hypocrisy? Well, Alexandria Ocasio-Cortez is one of those politicians for sure. She is definitely the type that when you think she can sink no lower, she goes and outdoes herself. Now, we have just learned that she is the PETTY type of politician as well. Here’s how:

It seems that they are featuring Alexandria Ocasio-Cortez on the cover of the December issue of Vanity Fair magazine. No, that’s not necessarily a bad thing, but GET THIS….

She was acting more like a supermodel than a politician allegedly looking out for the interests of her constituents, as it has been confirmed that the cost of the outfits that AOC wore for this interview for Vanity Fair totaled over $14,000!

The shoot was done by photographer Tyler Mitchell, and it featured AOC in an ivory silk wool suit designed by Ali’ette for the cover of the magazine. This particular women’s business silk would set someone back about $1,000! I don’t know about you, folks, but I myself would have a difficult time even affording a SUBSCRIPTION to Vanity Fair, much less all of the expensive clothing that AOC was wearing. Oh well, I guess AOC isn’t tending bars anymore, so she can afford it…

Before I digress too much, AOC also wore a Loewe suit, jewelry designed by the Mateo company, a Wales-Bonner polka-dot dress, Christian Louboutin heels, and a Carolina Herrera suit. Of course, the fact that she was wearing clothes and apparel that totaled more than what some of her poorest constituents made in a year was lost on her, but her opponents weren’t quite so forgiving. The main gist of their argument was that AOC’s PETTY choice of clothing was a far-cry from her chosen ideology as a Democratic socialist.
One of the opposing tweets read: “Here, we see AOC gracing the cover of Vanity Fair. She has clothes on that are estimated to cost at least $14,000. So glad to see that AOC is upholding her place as the paragon of virtue for everyone who is upholding socialism and at the same time reaping the benefits of capitalism!”

Of course, this young Bernie Sanders protege’ that we all know and love didn’t take these comments lying down. She had a rebuttal, claiming that the clothes were simply borrowed, and yes, this is the usual practice for a magazine or professional social media photo shoot.

While this is indeed true, the typical cocky and smug attitude from a holier-than-thou liberal such as AOC was shining through relentlessly.

She saved her most cutthroat comments for Fox News anchor Laura Ingraham, responding to her that the photo shoot was “100% worth it, and I would absolutely do it again.” But AOC wasn’t done yet, folks. She went on to slam Ingraham by saying: “And I’m not sure if you’ve ever been in a photo shoot, Laura, but no, you don’t keep the clothes.”

AOC then had some more words of wisdom for her GOP colleagues in a subsequent tweet: “Republcians are mad again about my appearance. Well, even though they are mad that I look so good in borrowed clothes (again), I do have some words of wisdom for them: drink more water and don’t be racist.”

Conde’ Nast (the publisher of Vanity Fair), Loewe, Ali’ette, Wales Bonner, Carolina Herrera, Christian Louboutin, and Mateo have not responded for comment. There’s no question about it: AOC continues to be a paragon of liberal virtues!