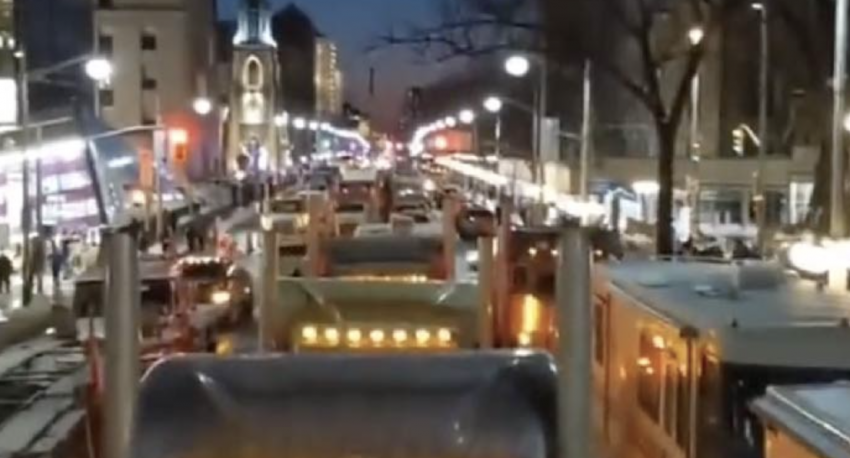 It is amazing to see what is going on in Canada right now.

All of these hard-working people, coming together to fight for their nation is awe-inspiring.

Just take a quick look at this.

Then there was this tweet that sadly, hit way too close to home and what is sad is that it is too.

“Must be nice to live in a country where you can protest without your government calling you a terrorist and using undercover police to make you look bad and entrap normal citizens.”

Must be nice to live in a country where you can protest without your government calling you a terrorist and using undercover police to make you look bad and entrap normal citizens. https://t.co/bbTmeS4BmT

I am sure you must be wondering while watching this where is Justin Trudeau?

Where is Canada’s leader?

Oh, he ran away like the little sissy he is.

He packed up his family and headed to an undisclosed location, where he’s hiding from his own people.

Justin Trudeau literally ran away from his house in Ottawa to not have to face working class people and answer to them for his policies.

The good news is, the “protest” is already starting to work – a top official in Saskatchewan is calling for the government to end the vax mandates.

They just need to hold the line and keep at it.

I will be completely honest and say that I wish that our truckers would do this too here.

It would amazing to see and can you imagine the spark it would light for the world to see?

It isn’t too late at all!

In fact, there are rumors going around that once the Ottawa situation is over, truckers will be heading to D.C.

Epoch Times is reporting that American truckers protesting against vaccine mandates and government overreach have been joining a record-breaking Canadian convoy of tens of thousands of vehicles headed to Ottawa.

Brian Von D, the administrator at “Convoy to DC 2022” announced that they will “join forces” to ride from California to Washington, adding that “America is next.”

“As [the Canadian convoy] moved from the west to the east, [the American truckers] have been filtering into this convoy, and it is absolutely massive. It is known worldwide, it is the largest thus far,” he said in a live video on Facebook.

That’s why when I saw this video clip, it gave me hope.

It’s only about 30-seconds long, but I think you’ll still want to bump up the volume!

Like I said if this were to happen in America, the world would go wild, but sadly we have an FBI that is more than willing to infiltrate it and turn it into another “riot.”

Doesn’t matter, we’re hip to their game now, and as Human Events editor Jack Posobiec always says – if you see someone starting to “stir stuff up” in a crowd, whip out your phone and film them.

Be careful if you are in that Convoy of Freedom – anyone starts talking violence you whip out your phone and film them!