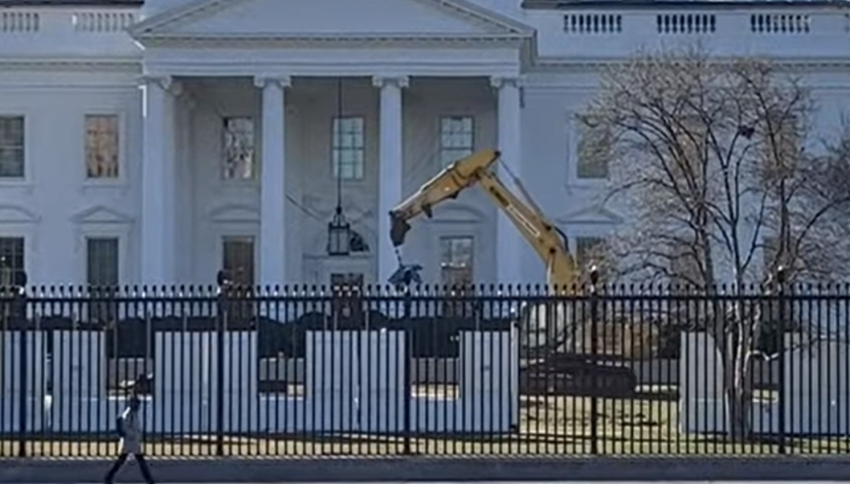 There is a lot of strange things happening in our nation, and if anyone thought that 2022 would be less strange, you would be wrong.

Just a couple of weeks into the new year, there are questions being raised about, well everything.

Now, there is something new happening and it has social media abuzz.

I first saw this image on Instagram last night, and I posted it asking what everyone thought it was about.

Some people suggested that it has to do with the January 6 committee optics, and others said it was just a distraction to get us all diverted.

In all honesty, it could be anything since anything is possible now.

After all, there are more genders than ice cream flavors at Baskin and Robbins.

In the video, a digger can be seen moving white concrete barriers around on the White House’s lawn.

It’s unknown what the concrete barriers were put up for, but Andrew Leyden the videographer who filmed the construction believes it’s for repairing the White Houses’ fountain, although it seems bizarre that walls would be needed to do maintenance on a water fountain.

Here’s a glimpse of the wall being constructed:

Video of walls around the White Housepic.twitter.com/BVW3JLztNW

We all have a problem …. they're putting a pre-fab concrete wall around the Whitehouse right now. I'm sure you might have some conclusions …. especially when the News Organizations are silent. pic.twitter.com/ew5v43BIqv

As of right now the corporate media or the White House has not released any official statement on why the barriers are being constructed.

Conservative Tree House was the first to report the story:

These types of security barriers are sometimes erected when heads of state are planning to come to the White House. However, there doesn’t appear to be any information about an anticipated delegation or foreign dignitary.

Additionally, according to one researcher on social media {LINK}, all of the publicly available CCTV video-streams have been disabled as this work is taking place.

The perimeter fence appears to be approximately 10′ high and is made from reinforced concrete k-rails.

You never want to jump to conclusions, but given the COVID pandemic situation it’s doubtful the fencing would be for a head of state arrival.

If you would like to look at the ongoing construction take a look here:

32 thoughts on “Why Is There Concrete Walls Being Put Up Around The White House? [WATCH]”