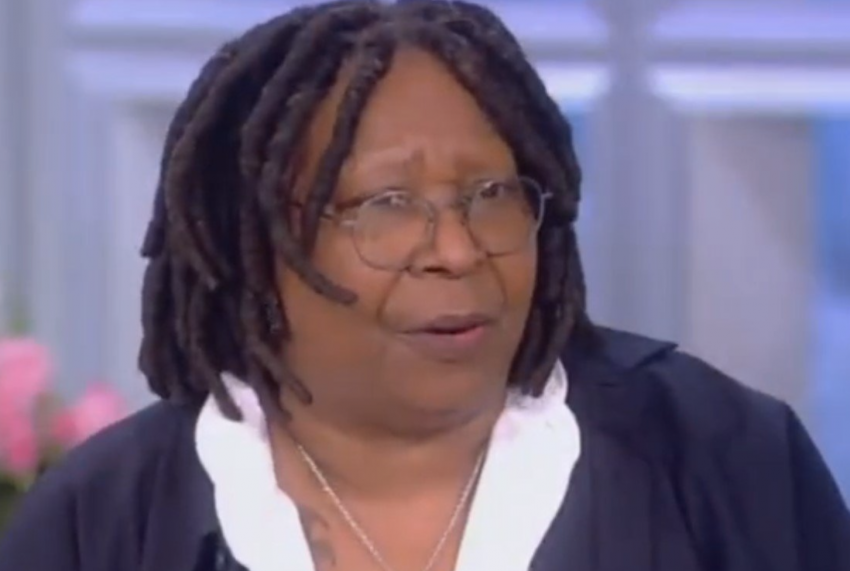 Hell must have frozen over since Whoopi Goldberg was suspended for two weeks from the ‘The View’.

What was Goldberg suspended over? Her absolutely disgusting racist comments concerning the Holocaust. Goldberg had the audacity to say that the Holocaust was not about race at all and she didn’t just say it once, but repeatedly.

It was so bad that even the far-left ABC network was appalled by her behavior.

So, it was with much celebration that it was announced that she was benched. In all honesty, the blatantly racist Goldberg should have been fired, but heck, public humiliation works too.

Here is what broke last night:

She was suspended over this clip:

BREAKING: Whoopi Goldberg SUSPENDED from The View for 2 weeks after bizarre rant on air claiming “the Holocaust isn’t about race”

Sparks fly as The View panel confronts Whoopi after she says "the Holocaust isn't about race. No. It's not about race."
"Well, the considered Jews a different race," Joy Behar says.

"But it's about white supremacy. It's about going after Jews and Gypsies," Ana Navarro adds. pic.twitter.com/GZwZSi2qXi

“Effective immediately, I am suspending Whoopi Goldberg for two weeks for her wrong and hurtful comments,” ABC News president Kim Godwin said in a statement Tuesday evening. “While Whoopi has apologized, I’ve asked her to take time to reflect and learn about the impact of her comments.”

Goldberg went viral on Monday when she argued that the Holocaust “isn’t about race,” stunning her colleagues at the table.

“What is it about?” co-host Joy Behar asked.

“It’s about man’s inhumanity to man, that’s what it’s about,” Goldberg said.

“But it’s about a White supremacist going after Jews and Gypsies,” guest co-host Ana Navarro said as Goldberg attempted to speak over her.

“But these are two White groups of people,” Goldberg said as her colleagues disagreed.

Goldberg attempted to explain her remarks during her appearance on “The Late Show.”

“It upset a lot of people which was never, ever, ever, ever my intention… I thought we were having a discussion,” Goldberg told Stephen Colbert. “I think of race as being something that I can see… “You couldn’t tell who was Jewish. They had to delve deeply to figure it out… My point is, they had to do the work.”

She also told Colbert, “I don’t want to fake apologize…I’m very upset that people misunderstood what I was saying.”

Before the pre-taped interview aired on CBS, Goldberg issued an apology.

“On today’s show, I said the Holocaust ‘is not about race, but about man’s inhumanity to man.’ I should have said it is about both,” Goldberg wrote in a statement. “As Jonathan Greenblatt from the Anti-Defamation League shared, ‘The Holocaust was about the Nazi’s systematic annihilation of the Jewish people – who they deemed to be an inferior race.’ I stand corrected.”

Here is what Ben Shapiro had to say:

Whoopi Goldberg explaining that the Holocaust wasn't about race because these were "two groups of white people" isn't just insipid, it's insidious. It's downplaying the minority status of Jews in order to uphold bullshit intersectional arguments that justify anti-Semitism today.

In my opinion, she should be fired for her comments.

They are the epitome of what racism is but she gets a pass still, why?