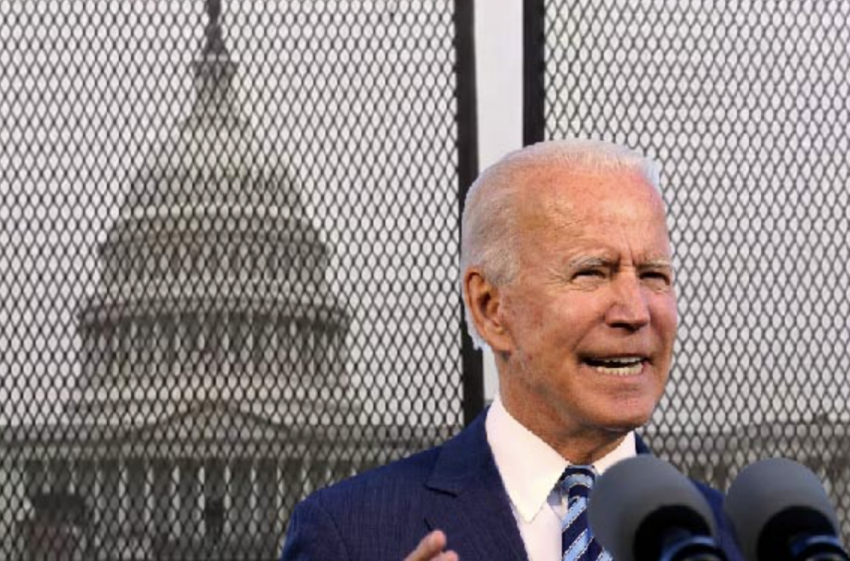 Now, what is going on with the fence around the Capitol… again.

It sure does seem strange that the ” most popular president” would have to put a fence up around the White House, right?

Seriously, what is that all about?

Is Joe Biden being paranoid or is this some sort of political theatre again to keep everyone on edge?

Personally, I am thinking that it is a little bit of both considering Biden’s tanking poll numbers.

It is also quite possible that Biden has no idea what is going on, but you sure as hell know his handlers know things aren’t good for the old coot.

So, the fence is going back up again.

That fence they put up around your capitol when the illegitimate regime was installed is going back up soon.

Biden’s team claim that it is going up over Biden’s SOTU address and the Trucker convoy heading to DC to “disrupt” that event.

So, now he isn’t the most beloved president of our time?

Wouldn’t Biden want to be face-to-face with all his supporters who adore him?

The fact is, the truckers won’t be anywhere CLOSE to DC during Joe’s “SOTU” address. It so happens that it will be March 1st when they leave and start the convoy, according to reports.

Sounds to me like they just want an excuse to get the fencing up now.

Fox News reported that security officials will reinstall fencing around the Capitol next week ahead of President Biden’s State of the Union address, Fox News can confirm.

U.S. Capitol Police are bracing for a potential “Freedom Convoy” truck protest to Washington, D.C., for the March 1 speech. “Freedom Convoy” truckers have been protesting in Canada for weeks against coronavirus restrictions and vaccine mandates and caused a temporary blockade of the busy Ambassador Bridge border crossing between Windsor and Detroit.

Capitol Police say they are “aware” of similar protests coming to Washington, D.C., and are making plans to both “facilitate” First Amendment protest activity while working with law enforcement agencies and D.C. National Guard to prepare for Biden’s address.

“Law enforcement agencies across the National Capital Region are aware of plans for a series of truck convoys arriving in Washington, D.C., around the time of the State of the Union,” police said. “As with any demonstration, the USCP will facilitate lawful First Amendment activity.”

The US convoy is being handled much differently than the Ottawa protest. Politicians will greet the US truckers once they arrive in DC.

It definitely lacks the “grassroots” vibe that Canada’s protest has – let’s hope the American people organically get behind this movement and send a strong message to Biden and his cronies.

3 thoughts on “What’s The REAL Reason Biden Is Building A Fence Around The Capitol?”