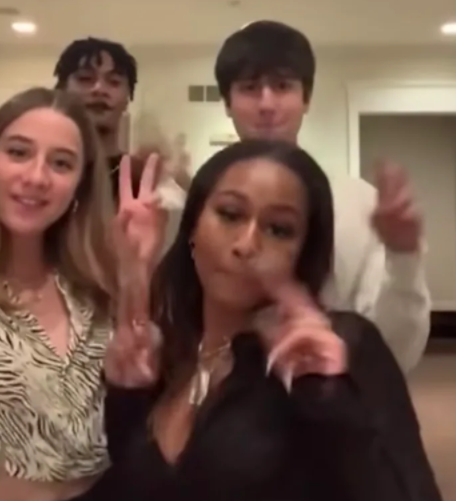 TikTok has become well-known as a video app where millennials and the Gen Z crowd will have a good time and dance to a variety of music. Well, apparently Barack and Michelle Obama’s daughter has taken to TikTok as well, and she has gotten a little bit carried away, to say the least.
Apparently, the 19-year-old former First Daughter was dancing to a choreographed song called Adderall (Corvette Corvette) by Popp Hunna with a few friends from the University of Michigan.
That’s right. Sasha Obama was front and center in the TikTok video (since deleted) that shows her wearing a long, chunky golden necklace and a rather risque’ low-cut blouse with some long white nails as she danced with her friends. She was looking every bit the diva, to say the least.
This video was uploaded by someone with an account named @pixiestick222, and not by Sasha herself because she doesn’t seem to have a TikTok account. The video shows Sasha dancing seemingly without a care in the world, even though it is clearly evident that the group’s song of choice has the word “****ch” in it. Do you think that if Ivanka or Tiffany had been in a similar video there wouldn’t have been a liberal media outcry?
Of course, Sasha did have her share of controversy from her electronic jaunt as well. It all started with someone actually complaining that Sasha and her dance partners had neglected to wear face masks. However, it isn’t clear whether this particular video was made during the outbreak or not, so we should probably give Sasha and her friends a pass. On the other hand, it is likely that this video was recorded DURING the pandemic simply because this song went viral on the TikTok platform just last October.
Others decried Sasha Obama for glorifying a song that had such depraved vulgarity. Many individuals reposted the video several times on Twitter, and that is one area where Sasha was repeatedly slammed for alleged poor taste in music.
Still there were others who noticed that Sasha only had white dancing participants. “Sasha only has some white friends?” one person asked.
Once you account for the various iterations of the video, it was ultimately viewed millions of times. Some were actually disappointed in Sasha Obama.
“I have a hard time believing that she thinks rapping to these videos is appropriate,” one person wrote. “Looks like the future of black women is doomed.”
Of course, there were plenty of other people who jumped to Sasha’s defense as well.
“Yeah, Sasha is dancing to some rough rap songs at 19….well, I was smoking Mary Jane and drinking Wild Turkey when I was her age, so give her a break,” one person commented. “She’s doing fine.”
“Sasha’s in college and her pops been out of office for four years now. Let her be,” another person wrote.
“She’s just living her best life as the slogan goes,” said another.
Well, it IS a bit of a vulgar song, and it DOES illustrate that liberals can get away with a lot more than conservatives can. What do YOU think of Sasha’s dancing habits? Feel free to COMMENT.