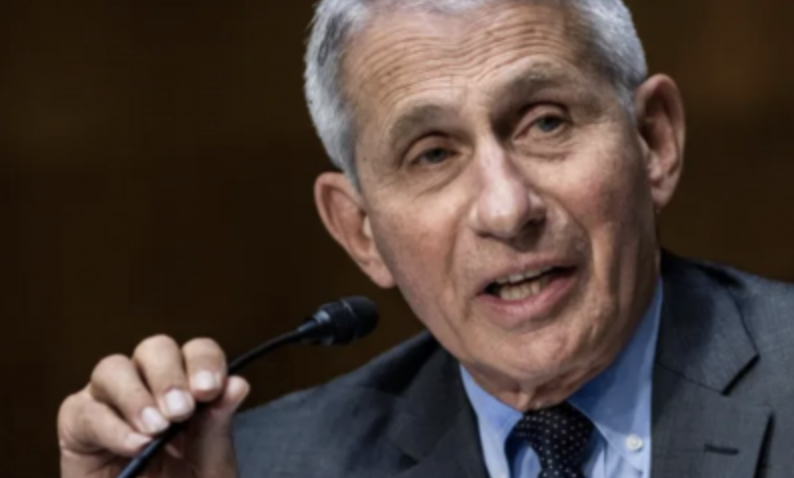 The COVID pandemic has been going strong for the last two years and we may finally be seeing the light at the end of the tunnel, and that is thanks to other nations blowing the lid off the whole story.

For many months, there have been American’s who have questioned if the virus was truly as bad as government officials have stated in the past.

After all, the virus was never isolated and most people who have had it have compared it to having a case of influenza.

Though, after months of nations being in forced lockdowns, economies collapsing and inflation soaring, people are sick of it all and ready to live again.

However, Dr. Anthony Fauci has been reluctant to release his hold on the American people with his draconian measures, till now.

All of a sudden Fauci has been singing a new tune and many people are wondering where this is coming from, and now we know.

Market Watch reported that the U.S. is heading out of the “full-blown pandemic phase” of COVID-19 and moving toward a point where more decisions will be made at the local level and not by the federal government, allowing restrictions such as wearing face masks to be lifted over time.

That’s according to Dr. Anthony Fauci, head of the National Institute of Allergy and Infectious Diseases and President Joe Biden’s chief medical adviser, in an interview with the Financial Times.

In his most upbeat remarks on the state of the crisis, Fauci said he hoped restrictions would be ended in the coming months as a combination of vaccines, treatments including antivirals and prior infection would make the virus more manageable.

“There is no way we are going to eradicate this virus,” he said. “But I hope we are looking at a time when we have enough people vaccinated and enough people with protection from previous infection that he COVID restrictions will soon be a thing of the past.”

We know that the Dems want to steer away from COVID because it’s killing them in the polls, but this new bombshell investigative report could also play into that decision. Now, it’s not just “US right-wingers” going after Fauci. It’s other countries as well… and they’re blaming him for everything.

Aussie media has released a 5-part bombshell series exposing Fauci and his gain of function research, and more.

Back in May of 2021, Aussies also published this on Fauci:

America’s top medical adviser for the coronavirus, Anthony Fauci, argued that the benefits of experimenting on contagious viruses – manipulating and heightening their infectious potency – was worth the risk of a laboratory accident sparking a pandemic.

In previously unreported remarks, Dr Fauci supported the contentious gain-of-­function experiments that some now fear might have led to an escape from a Wuhan laboratory causing the Covid-19 pandemic, calling them “important work”.

An investigation by The Weekend Australian has also confirmed Dr Fauci, the director of the Nat­ional Institute of Allergy and Infectious Diseases, did not alert senior White House officials before lifting the ban on gain-of-function research in 2017.

Writing in the American Society for Microbiology in October 2012, Dr Fauci acknowledged the controversial scientific research could spark a pandemic.

“In an unlikely but conceivable turn of events, what if that scientist becomes infected with the virus, which leads to an outbreak and ultimately triggers a pandemic?” he wrote. “Many ask reasonable questions: given the possibility of such a scenario – however remote – should the initial experiments have been performed and/or published in the first place, and what were the processes involved in this decision?

“Scientists working in this field might say – as indeed I have said – that the benefits of such experiments and the resulting knowledge outweigh the risks.

Dr Fauci has led the US response to the outbreak but is now facing serious questions about his role in funding the radical experiments being conducted inside the Wuhan Institute of Virology.

A forthcoming book, What ­Really Happened in Wuhan, documents increasing concerns that a leak from the Wuhan lab – and not natural spread via an animal in a wet market – could have sparked the Covid-19 crisis that has up-ended every nation in the world and killed 3.4 million people.

Dr Fauci on May 11 reversed his position on whether Covid-19 had leaked from the WIV, and said he was now “not convinced” the virus had developed naturally and authorities needed to find out “exactly what happened”.

This type of research carries such a risk of causing a pandemic that the Obama administration paused funding for gain-of-­function experiments in 22 fields in 2014, including those involving SARS, influenza and MERS.

US President Joe Biden this week ordered a fresh US intelligence inquiry into whether the virus had originated at the laboratory, while WHO director-general Tedros Adhanom Ghebreyesus said his team’s inquiry into the origins did not sufficiently examine an accidental laboratory leak.

The NIH has come under significant criticism in recent weeks over funding WIV research relating to change-of-function, which Dr Fauci denies. Earlier this month, he told a US Senate hearing that the NIH “has not ever and does not now fund gain-of-function research in the WIV”.

Yet papers published as late as last year in American peer-­reviewed academic journals that include WIV researchers – including its prominent virologist Shi Zhengli – disclose that work on coronaviruses had been funded by at least three NIH grants.

At the time of Dr Fauci’s paper, there was a voluntary ban on gain-of-function research related to highly infectious influenza ­viruses. He asked what would happen if the experiments were conducted by a lab not subject to adequate safety regulations.

In this damning 5-part series that has everyone talking – and bonus – it probably has Fauci shaking in his little commie boots.

You can watch all 5-parts below:

Australian Media Places Blame for the Pandemic on Fauci.

This will be echoed World Wide.

While our media might go soft on Fauci — CNN is still treating him like a “hero,” the rest of the world’s reporters are actually doing what they’re paid to do — they’re investigating and looking into things and then reporting on what they found.

Gee, what a novel idea.

However, you have to wonder, with this sudden “about-face” is Fauci trying to take the heat off of himself so he can slither back under a rock while things cool down?

That may not be the only reason, but it could be part of it – especially with the Republicans poised to take back the House and Senate in 2022.

We have heard Rand Paul state that is going to go after Fauci and I certainly hope he does, which must make the “good” doctor nervous.

Let me know what you think!