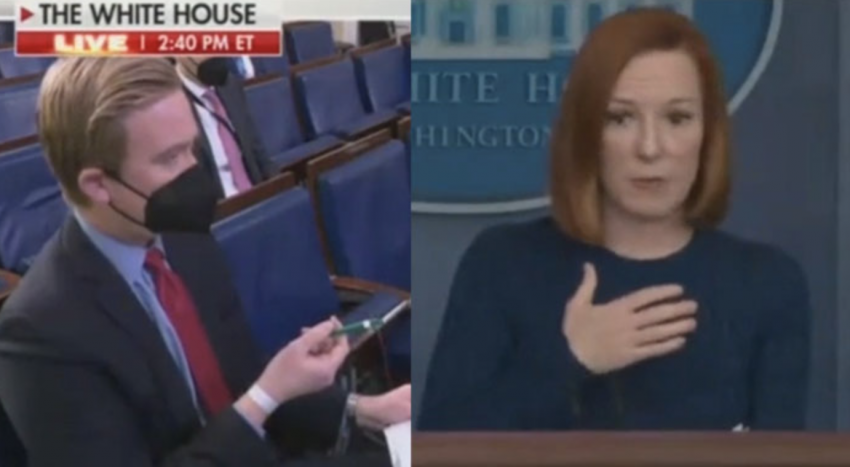 Who would love to be a fly on the wall in Press Secretary Jes Psaki’s office?

I know I can say with 100% certainty that I would love to be in there to hear her lose her marbles.

Especially after the verbal lashing she received for six minutes by Peter Doocy.

Psaki has been struggling recently as the narrative she has been pushing for the last year about the COVID virus is rapidly falling apart.

No longer is Psaki acting all sassy to Doocy when he asks a question. The snarky comebacks are silent, and the evil glint in her eye has been replaced with what some could say with defeat.

She knows that she has lost, and all she can do now is tread water and tries to keep her head afloat.

Psaki has traded in her “girl power” tee and has adopted a more coy and sheepish approach to answering questions from Doocy.

It may have been an attempt to get Doocy to show mercy on her by playing the cutesie role.

The whole performance should get Psaki kicked out of her “down with the patriarchy” club with how she is acting now.

However, Doocy was not falling for it and spent six minutes humiliating Little Red Lying Hood.

There was no chance for her to circle back in this brutal tirade from the Fox reporter, and it was glorious.

“If you were her husband and you had to ask her if she cheated on you, given her daily job I’d just start packing my shit.”

everything she said was how to get tested AFTER the surge started but they dropped the ball to have the tests BEFORE the surge hit. Especially back in Oct. when Biden declined to buy more tests.”

“Let her have it, Peter! Way to represent. Thank you.”

“Thank God we have Peter Doocy”

Jen cannot hide, and she has nowhere to go.

That is what happens when the narrative crumbles, and you become the butt of your joke.