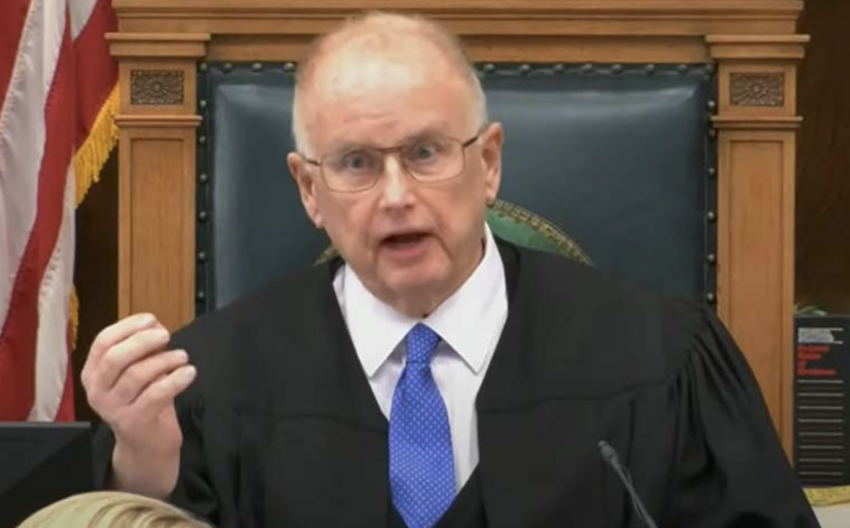 If you have not been keeping up with the Kyle Rittenhouse trial you are certainly missing out.

Of course, the entire trial is a sham since we all know that this shooting was completely done in self-defense despite what the left and the mainstream media have said.

The prosecutors are doing their best to put Rittenhouse behind bars by twisting the facts into a woke narrative but thankfully, the judge presiding over the case is not having any of it.

Judge Bruce Schroeder has not been putting up with any of the prosecution’s dirty tactics to bury Rittenhouse.

In fact, Judge Schroeder has already blasted prosecutor Thomas Binger for attempting some of his dirty tricks trying his best to frame Kyle as a cold-blooded murderer.

The judge is a true American and if you had any doubt about that just listen to his ringtone when his cellphone rang during the trial.

Judge Schroeder gets a call mid-trial & his ringtone is ….
“Proud to be an American” 🇺🇸#Rittenshouse

Did you hear that?

“Proud to be an American” is playing on the judge’s phone.

How awesome was that!

That’s not the only highlight of the trial.

Judge Schroeder absolutely blasted the prosecutors who are attempting to put Kyle Rittenhouse behind bars.

this is … not going well for the prosecutor pic.twitter.com/tPjYIrEORK

The Daily Dot had more on the story:

Today, Kyle Rittenhouse took the stand during his murder trial. Rittenhouse killed two and wounded a third during a protest over the police shooting of Jacob Blake. Rittenhouse is pleading self-defense. Rittenhouse’s testimony this morning generated intense online discourse about the teen weeping and Judge Bruce Schroeder heated admonishment of the prosecution.

Soon after the lunch break, Rittenhouse’s highly anticipated testimony was temporarily interrupted when a cell phone rang. It’s not entirely clear whose phone rang, but as strains of the song reverberated through the courtroom, the camera panned over to Judge Schroeder, who appeared to be silencing his phone.

The moment ordinarily would’ve been quickly forgotten. But the ringtone turned out to be Lee Greenwood’s patriotic anthem “God Bless the U.S.A.”—a standard number at former President Donald Trump’s rallies.

"Don't get brazen with me," judge warns: pic.twitter.com/Q0P9Ufm8aO

This Judge play by the rules not the woke mob’s narratives!