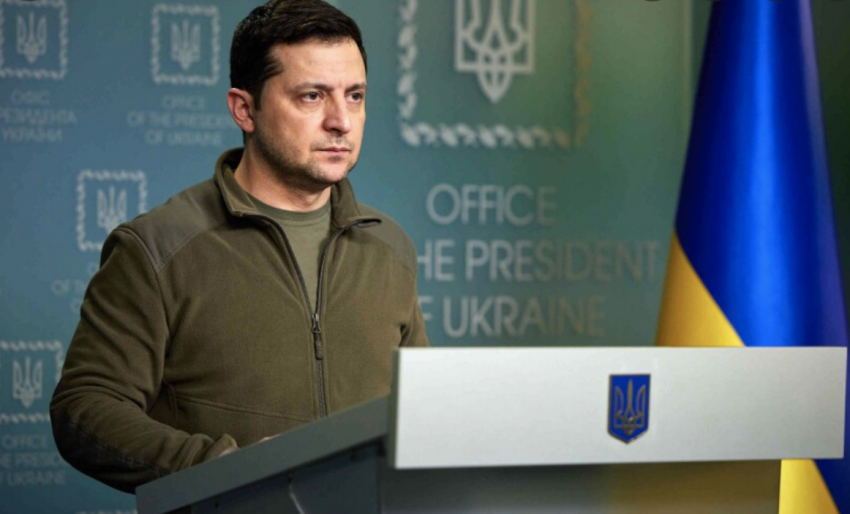 There is a lot we don’t know about what is happening with Ukraine and Russia.

To be fair, will we ever really know what is happening over there and what is truth and what is fiction.

However, one thing I do know is that there are real men, women, and children being harmed in the struggle and that will never be ok with me.

The mainstream media has been telling us all that this struggle is Russia being a bully and wanting to take back Ukraine.

Now, that could very well be, but then there are still a lot of questions concerning President Zelensky.

Stay with me for a moment here.

When the mainstream media focuses on one narrative, it often means it’s probably disinformation.

In other words: Fake News!

And the Fakest of all News recently has been President Zelensky of Ukraine is a white hat good guy.

It appears nothing could be farther from the truth.

Well, that is according to our friends over at We Love Trump.

Earlier this week, they posted an article showing Zelensky in a video that has raised some eyebrows.

Here’s what the NY Post had to say about the video:

In addition to his political career and leadership, Ukrainian President Volodymyr Zelensky is receiving praise from many on social media for his entertainment past.

A resurfaced montage of Zelensky being nimble on his feet and his winning ballets on the country’s version of “Dancing with the Stars” from 2006 went viral on Monday.

Fans from Twitter to TikTok are fawning over Zelensky’s moves — including one number that saw him and his partner Olena Shoptenko donning full blindfolds as they mentally counted steps, hitting their marks with perfection.

“I actually fainted tho [sic],” one Tik Tok user captioned a clip of Zelensky and Shoptenko performing.

Celebration for Zelensky’s light-footedness came just days after British actor Hugh Bonneville, one of the stars of the “Paddington” franchise, made the revelation that the 44-year-old was the familiar voice behind the Peruvian Bear in the Ukrainian versions of “Paddington” and “Paddington 2.”

The news has since been confirmed by the film’s producer, StudioCanal, to The Hollywood Reporter.

So, let’s take a look at Zelensky.

For a lot of people, something about him has never sat right with them.

I have heard people say that for them, it started when they used his phone call with President Trump as the basis for the first phony impeachment.

NOT an accident, in my opinion.

This Deep State stooge was hand-selected to play a role.

Is he in the Deep State?

Well, he certainly supports the New World Order and all their Demonic, Luciferian symbolism.

Just take a look at this: Let’s break down what some of these symbols mean.

Then you have the Devil Horns…

Then you have the “V” which is symbolic of the Devil…

And finally, you have about a million “one eye” images.

The Eye of Horus.

All just coincidences that he keeps posing like that, I’m sure.

Though others are noticing it too.

Zelensky is not a "hero".

He is a WEF/New World Order puppet figurehead, not unlike Biden.

Is he fighting for Ukraine or the WEF New World Order

Question everything you hear on the media https://t.co/1HIF2xKfi3

Zelensky managed to buy a villa in Miami for $34 million, several sets of jewelry for $5.6 million.
Jewish Zelensky has accumulated $1.2 billion during the first two and a half years of his presidency.
Nice spiked heels
Just like Covid. People suckered to die
NEW WORLD ORDER pic.twitter.com/GDhm3Y4suj

Col. Douglas McGregor is 100% correct. Zelensky is a NWO/US Puppet, and this all could have ended days ago. pic.twitter.com/vT4c3KJCHc

Ukrainian President Volodymyr Zelensky is part of the Luciferian Illuminati,he is NWO dark side,here we see the all seeing eye symbol pic.twitter.com/efXSq3n9Cu

When are people going to realize Zelensky is part of the corrupt Cabal and the enemy? #NWO#Illuminati#Cabal#Globalist pic.twitter.com/AvYxNwKPUq

The sheep across the globe believing Putin is the Boogeyman & Zelensky the Soros globalist puppet is wonderful? 🤡

You are supporting a corrupt global economic takeover by unelected psychopaths at the WEF Davos & bureaucrats who will enslave us all.. Nazi NWO

Who knows, but I know the WEF is EVIL. #Zelensky #Putin #Schwab #WEF #NWO pic.twitter.com/FPLhBTRvn4 The bribery and threats?

Let’s end with a real gem on Rumble: